Driven by historical authenticity, the American Queen’s design is based on meticulous research into 19th-century documents and records. The result is a grand steamboat that pays homage to the floating palaces of the mid-1800s. And essential to any self-respecting steamboat is her steam calliope.

So what exactly is a steam calliope? A calliope is a musical instrument, a steam-whistle organ to be exact. It consists of a set of whistle pipes and a music box-style organ. The organ’s keyboard controls the steam entering into the pipes to play the appropriate cord or sound. David Morecraft of Peru, Indiana fabricated and installed the American Queen’s beautiful set of 37 shining, gold-plated whistles along with the keyboard on which they are played.

Steamboating vacations commence at a magical time of day, just before the sun begins its graceful descent from the sky. A steam whistle sounds, the great red paddlewheel begins to churn, and the elegant steamboat gently glides away from the landing and onto the river that will carry it toward the next port of call. Well-wishers on shore wave their goodbyes and the sound of the calliope – that mighty steam and iron piano – fills the air in salute, typically with a fun “Dixie” rendition.

Those who never dreamed they would play a steam calliope can even give it a try while cruising aboard the American Queen on of our river cruises! 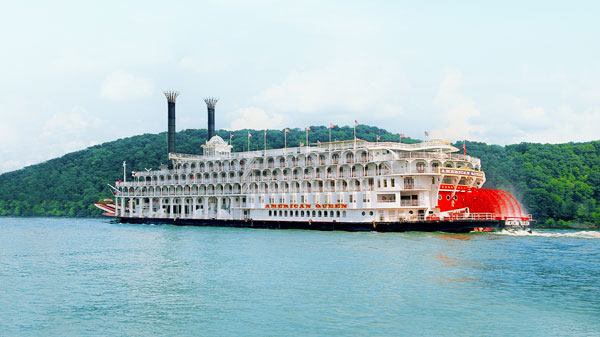